Revival’s own graphic designer, Valerie Post, listened closely to local administration and business owners and then hit the pavement to research, design, and source this much-needed street signs.

City officials will press ahead with a proposal to install a series of signs pointing the way to parking lots and businesses as part of an effort to promote interest in a downtown undergoing revitalization.

Council directed mayor Jeff Hazel and city safety service director Tom Hitchcock to do what it takes to make the project happen.

“I really appreciate them stepping up to the plate because this is exactly the direction we need to go,” Hazel said. “There are more businesses going downtown. There’s more just imminently planned to open up.”

“I know Mayor Hazel, several years ago, had tried to get this started but there were so many empty storefronts at the time,” she said. “Now we have so many of them filling up. The storefronts are really filling up and taking (off).”

“I just think it is amazing how much public parking there really is and you just don’t realize,” councilman Eric Lochtefeld said.

Post said it would also be helpful to add eight signs at the entrance of public parking lots.

Post estimates it would cost up to $7,826.28 to have the parking signs made. Advocates would like the city to pick up this cost. 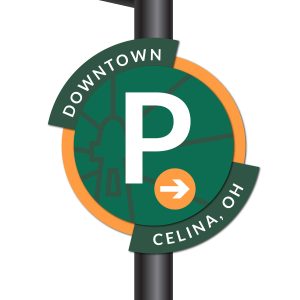 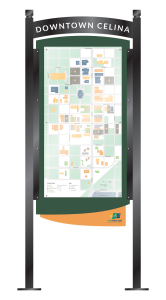 Secondly, they want to create a directory of downtown Celina to stear traffic from the Bryson Park District and lake area to the downtown businesses. It would contain a map of the downtown on one side and a Grand Lake Visitors Center map and fliers for downtown/lake events on the other side.

The group representing community organizations would like to see the directory installed by the lake in the vicinity of the lighthouse and shelter house. The Celina-Mercer County Chamber of Commerce would shoulder the estimated $6,750 cost.

“(The chamber) has taken interest in managing funding and maintaining the director signage,” a proposal reads. “The chamber is applying for a grant from the Grand Lake Visitors Center to aid in funding the directory. The chamber will be responsible for keeping the map updated and posting downtown/lake events on the sign.”

Last, the group wants to create four way-finding signs containing slots for business advertising placards. They would be installed at high foot traffic areas in the downtown.

“The placard includes space for a logo and/or business name, one directional arrow and the address of the business,” the proposal reads.

These signs, estimated to cost up to $8,814.55, would be paid for and maintained by a group of Celina retailers, according to the proposal.

“As Celina’s downtown continues to grow and attract new businesses, the introduction of new ‘Way-Find’ and ‘Public Parking’ signage at this point makes sense,” Mercer County Community Development Director Jared Ebbing was quoted as saying in the proposal. “The signage will not only be a recognition of all the great destinations currently here but will also foster more grown and attraction to the area as it will show the vibrancy of our resurgent downtown.”